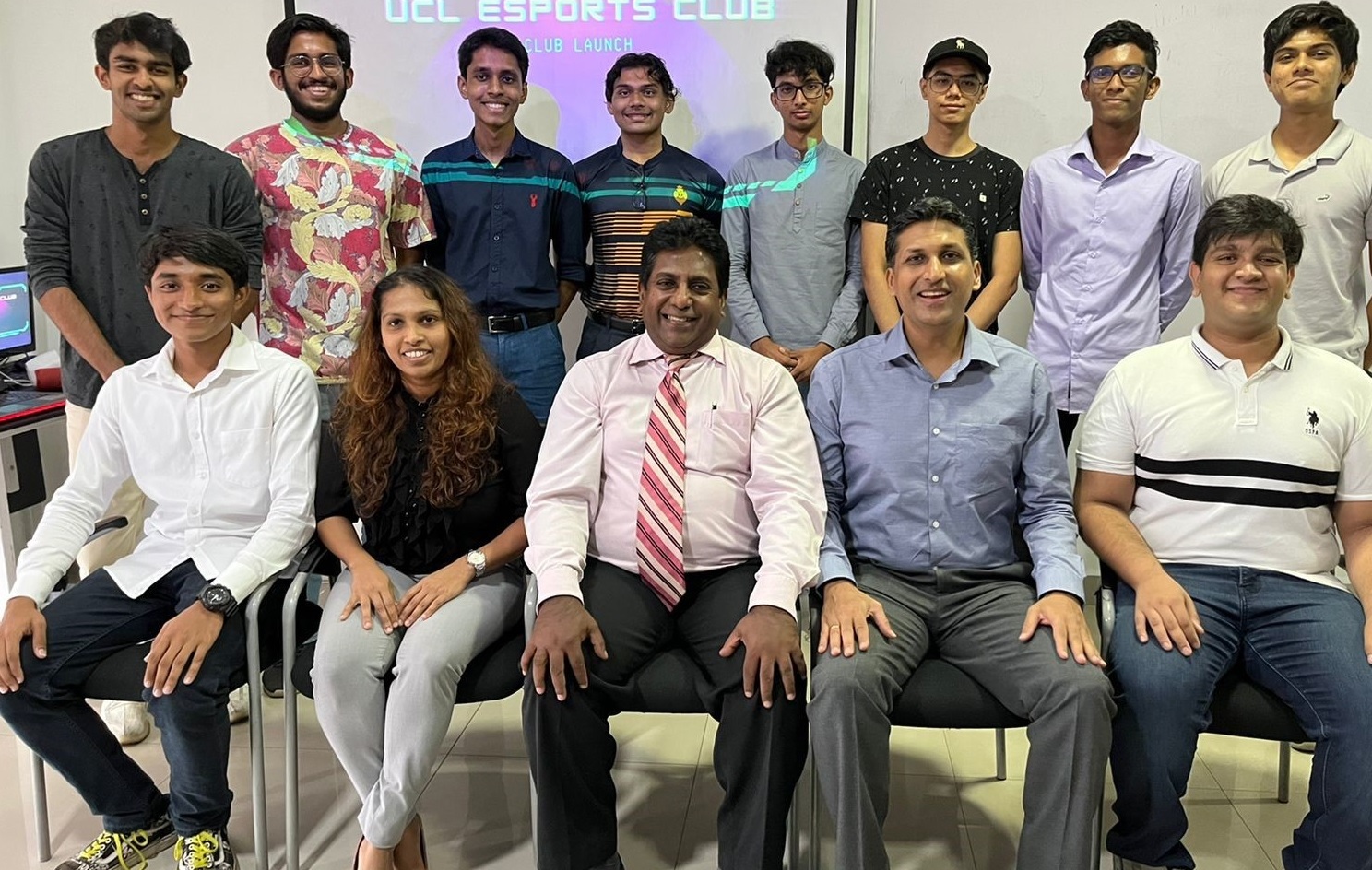 When illusion and reality combine to combustion can cause a few sparks of genius! And this is what happened at UCL with the formation of the UCL eSports Club.

The launch of the UCL eSports Club is a spark of genius and ingenuity by two master-minds Umar and Manuga, current students of UCL who are champion gamesters. Co-founders Umar Fazeer and Yuthmin Manuga Wijesundarabandara, the President and Vice President respectively, led proceedings, alongside Secretary Akil Fernando, and Treasurer Nadiv Jayetilaka to introduce the eSports club and appoint its committee comprising of Zulqarnain Rizwan, Sachintha Senanayake, Ishwahaq Nizar, Adithya Perera, Ajaz Imran and Damiru Abeysekera. The energy, enthusiasm and talent were oozing at the launch with many die-hard gaming enthusiasts ‘eager-beaver’ to start competitions professionally in the gaming industry.

“We have sports champions, but we do not have a club to gather them. This club would unite those who love gaming to be the best”, stated Umar Fazeer, the President, with enthusiasm.

The club will see its members testing their might at all the most popular games ranging from Valorant and Call of Duty, to DOTA 2 and Rocket League, among many others. The games are combative, sporty and require tactical skill and precision.

The eSports industry is one of rapid growth, surging in popularity internationally, as well as in Sri Lanka. With the ever-growing awareness of this potent new medium of sport, UCL eSports Club is on a mission to make an impact on the competitive gaming scene. By laying its foundations now and unifying all of UCL’s gamers under one team, the club seeks to soon establish itself as a force to be reckoned with.

Many people were key to making the launch the resounding success that it was – notably, the Dean, Dr. Dhananjay Kulkarni was instrumental in making the event possible. Moreover, the club expresses its appreciation for UCL’s CEO Mr. Gihan Silva and the support he provided. Thanks must also be made to the Dean and Ms. Dilukshi Peiris for taking up the mantle of Staff Advisors of the club, as they will enable the club to rise to its lofty aspirations. The launch marked the birth of a powerful new force in UCL’s suite of extra-curriculars.

Together with a range of physical sports offered at UCL, the eSports initiative will be a boost for those who have a thirst and talent for gaming with a passion. It is also recommended that students engage in at least one physical sport if they wish to compete in the e-gaming arena.

Wasting no time, the budding group hit the ground running, already getting UCL students into the Inter-University eSports Championship. This tournament includes 64 universities from across Sri Lanka, battling it out to be the best of the best. Despite the tough competition, UCL’s very own Kaveen Wickramasinghe made his way all the way to the Rocket League finals, ultimately winning the title of Champion. With that, UCL won its first ever eSports title, and it happened within a mere 4 days of the club’s launch.

With plans for a number of competitions and other events, the UCL eSports Club have their sights set on making a name for themselves in the world of competitive gaming. Only time will tell if they have what it takes to thrive in the fierce arena of eSports.

Please feel free to contact Vice President Manuga on +94 774 456 239 for more information on eSports at UCL.